Review on Vinay Capila’s The Revolution And Other Stories


"Vinay Capila is a compelling story teller. Vinay lets his stories evolve on their own and never makes the readers feel he is bending the storyline. That is the power of him."

Meenakshi Chawla Reviews Vinay Capila’s The Revolution And Other Stories
Vinay Capila’s The Revolution And Other Stories is for the winter afternoons when the sun is old and mellow, and when the heart is seeking a warm refuge that envelopes, gently. The stories display a ripeness of perspective that comes from accepting the world—with all its flaws and flippancies. The readers can only conjecture that they are – from the author’s life – a full and rich life. 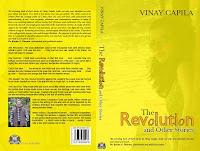 The first story from which the anthology takes its title ‘The Revolution’ is a titillating read that takes the readers through college-style ‘revolution’, that first flush of idealism and righteousness. The lengthiest story in the collection, it stands its ground until the end – which, incidentally, does not come as a surprise! The author builds up the atmospherics in this one rather well woven story – the university comes alive in one’s mind.

‘One Summer’ is a heart-warming story. It handles two momentous events, first love and a loved one’s death, with the simplicity of life itself. Nevertheless, there is innocence in the interactions between Sunita and Vinod that touches the readers’ heart. Adolescents that they are have not yet learnt the wiles of the world of adults. Where the story falters is in dealing with the memory of that first love. First love is almost always tender, and its memory almost always clutches at the heart in the most unexpected ways, at the most unexpected times. But on second thoughts, the author probably wishes to leave this understated.

‘Behind the Scenes’ is where the author is within his comfort zone; a production has drawn to its close, the cast has silently drifted away and the emptiness of endings enfolds the protagonist. Words and sentiment are doled out with sharp sure jabs, as they would be in a stage production. The author has captured the somber mood without arc lights and cues.

‘Fish and Chips’ lays out the quirky paths wealth takes to reach the people who have little or no need for it. Beneath the word-layers, there also surges a question: what is real – that which the eye sees, or that which the eye misses? So, indeed, which of the two Dr. Slopers is the real deal? Which of them is the real inheritor of the millions of dollar left behind by one of his relatives? The story flows naturally with the writer’s ink with an innate honesty – no clever twists or showy turns.

The usage of Indianism (for example, ‘A year back’) makes the language writer’s own, however sometimes it narrowly escapes slipping down to less refined language. Also, some stories lack clear destination, such as ‘Shepherd on the Mountain’ where the narrative is lost in multiple threads – the shepherd’s side, diary entries and a third perspective too.

The story unfolds largely in the protagonist’s mind and the reader is led through a complex question-answer-wonderment plot. The essence of a poetically-underpinned story is squandered in too much reflection and too many questions.

‘The Battle Within’ might leave a reader puzzled in its wake – does it or does it not deal with schizophrenia? The change in voice leads to a disjuncture in understanding. The narrative tends to lumber in a free-wheeling fashion.

Remarkably the writer, Vinay, escalates his sharp story telling skill with ‘The Idealist’ – a nicely sketched story. Vinay sketches his characters rather expertly: a line here, a flying curve there. It is left to the readers to fill the details into a love story nuanced with life and living.

Here is a collection of stories a dreamer, or a ‘straggler’ in the material world, might pen in his diary – a gracious framing of experiences, ideas and all those mundane days that made the man! The pieces resemble lyrical sunsets – bringing to viewers, and readers, a vague feeling of longing, a soft whispering sadness. The author, Vinay Capila, has been successful in his objective in that the reader’s thoughts linger on a story even after its last line has been read – just as the author’s mind might have lingered after his pen had moved on. He makes the stories his own and they flow on in their own rhythm – ebbing now and rising to a crescendo soon after. In this, his telling is vaguely reminiscent of Guy de Maupassant’s early work. It is a volume that every short story reader must add to his/her collection.

Reviewer: Meenakshi Chawla is a book review writer with Contemporary Literary Review India, and her writings have appeared with many other journals.

Contemporary Literary Review: India (CLRI) is looking for Ads Executive for its various versions. CLRI is a literary journal which brings out Kindle edition and is soon to launch its print version. For more details, visit: http://www.contemporaryliteraryreview-clri.com/

Work Responsibility: Collecting ads and subscription for its various versions.

Qualification: Good to speak, write and work in English language. Degree not a condition.

Experience: Should already be earning as this position is not salary based, it is incentive based. So think before you jump!

Facility: We will provide basic training and system about how to work.

Translate in Your Language